A powerful statement to inspire the world 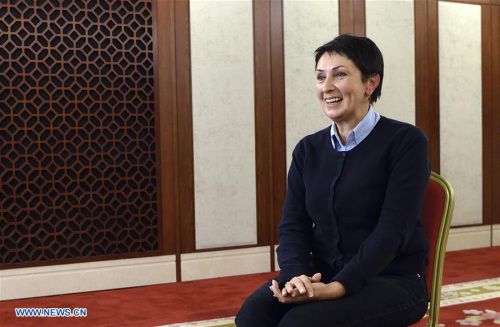 "This is a powerful document, which makes me feel strong and vigorous," said Olga Migunova from Russia, speaking of the report delivered by Xi Jinping at the 19th National Congress of the Communist Party of China (CPC) Wednesday.[Special Coverage]

Migunova was one of the nine foreign linguists asked to translate and edit the report. This was the first time since the reform and opening up that anyone except Chinese experts has worked on such material.

Mustafa Mohamed Ahmed Yahia, 60, from South Sudan, was responsible for the Arabic version of the report. "Letting us be directly involved in the translation shows the CPC's confidence, openness and transparency," Yahia told Xinhua.

To Holly Snape from the United Kingdom, the work is a demonstration of how the CPC and China are "really trying hard to communicate with the rest of the world."

The document, the most important Chinese policy statement in five years, has been translated into 10 foreign languages.

The nine editors were some of the very few who saw the report before it was delivered by Xi Wednesday. They had ten days to polish and edit the foreign language versions before Wednesday.

"On my first sight of the report, I couldn't take my eyes off it," Migunova said. "It held me spellbound like an enchanting novel. I was totally immersed in it, without having lunch or dinner from 8 in the morning to nearly midnight."

Learning Chinese for more than 10 years, Migunova has been involved in translating many government reports and CPC documents. "I feel all I had done in the past decades was just preparation for translating this report, and I often feel my Russian is not good enough."

Snape, who is at her 30s, described the report as "very powerful and very strong."

"Even for a non-Chinese native speaker, I can feel the determination behind the report, and how big the ideas are," she said.

Snape found it very difficult to convey some Chinese ideas in English, "consultative democracy" being just one example. In many parts of the original, there was a tempo and rhythm and real feeling, she said, with many difficult nuances to convey in English.

The 32,000-character report charts a new course for the world's second largest economy. Josep-Oriol Fortuny Carreras said it struck a balance between big ideas and concrete details, which was not easy.

From the report, the Spanish linguist saw the "determination" and "courage" of the CPC to deal with issues such as corruption and environmental problems.

Peggy Cantave Fuyet, responsible for the French version of the report, said it was "filled with vigor," and showed the CPC as a party moving forward.

For almost every foreign translator, the most impressive idea in the report is "socialism with Chinese characteristics for a new era."

Migunova called it a "historic theory," adding that she was also excited by the CPC vision and action on innovation, corruption, poverty and education.

Calling "socialism with Chinese characteristics for a new era" a "huge innovation idea," Snape said the effects of the new idea would be felt for many years to come, both in China and the world.

For Fontana Rafael, a Brazilian linguist responsible for the Portuguese version, the CPC's people-centered political philosophy impressed him the most. "The report clearly shows how the Party is always putting the people first."

Yahia of South Sudan, who read "Xi Jinping: The Governance of China" before translating the report, said the ideas of a "new era" and "a community with a shared future for mankind" impressed him the most.

German Konrad Hartmut Luening said the Chinese dream and the steps to reaching the goal excited him. "Looking to the future, I believe China will achieve the desired objective."

What struck Cantave Fuyet of France was the two-stage development plan Xi unveiled to make China a "great modern socialist country" by the middle of the 21st century.

"By then I might be too old. I hope my daughter, who will be in her 40s, will see the realization of the Chinese dream for me," she said, calling the plan an inspiration to the world.

The CPC, as a long-term ruling party, has the vision and ability to implement long-term policies, unlike many other parties, said Cantave Fuyet, who took a doctorate in the sinicization of Marxism from Renmin University in July this year.

Shuichi Iwasaki was proud of being the first Japanese person to see the report. A marathon runner who finished this year's Beijing marathon in 3 hours and 20 minutes, Iwasaki said the biggest change he had seen in the past one or two years in China was the improving air quality, which shows China and the CPC can meet goals in accordance with plans.

As the socialism with Chinese characteristics enters its new era, China presents new options for those countries who want to speed up development while preserving their independence, said Yahia.

Keovichith Lamngeun said he would share what he learned from the report with his people, and link it with Laos' national context.

For Iwasaki, the report came at a critical point, as this year marks the 45th anniversary of the normalization of China-Japan relations. "I think it contains a lot that Japan can learn from," Iwasaki said.

The Japanese translator described Xi as a "very capable" leader with vision and someone with broad, deep knowledge.

Other translators did not hesitate to describe Xi Jinping as a great leader. Yahia said Xi is a leader with strong leadership, global perspectives and a clear path into the future.

"I respect Xi Jinping and hold him in great esteem. We can see the leader of China has the qualities required by new times," said Migunova.

Carreras described Xi as an "unprecedented" leader who heads a very strong and stable party.

"I know all CPC congresses are historic, but this could be the most important. Xi Jinping and the CPC have a very clear idea of what China wants to achieve and how to do it," Carreras said.